Emergency Action in case of indictments or resubpoenas

Rasmea Odeh will address supporters and respond to questions via livestream. Following her remarks, local activists will address how folks in Minneapolis can support her with the March 12 sentencing hearing that will take place in Detroit. Donations for Rasmea’s defense will be requested.  Organized by the MN Committee to Stop FBI Repression and endorsed by the Anti-War Committee.

Also sign the online petition demanding the US government drop the charges against Rasmea. Go to http://www.stopfbi.net

Rasmea Odeh is a 67-year-old Palestinian American community leader who was tortured by the Israelis in 1969, and is now being unjustly prosecuted by the U.S. government.

Stand with Rasmea and fill the federal courthouse in Detroit!

Our work is not merely an act of solidarity with Rasmea Odeh, but also serves as a challenge to the unjust prosecution of a beloved Palestinian icon, as well as a refusal to accept the criminalization of an entire community.

Rasmea’s trial is set to begin on Tuesday, November 4th in Detroit at the Federal Courthouse at 231 W. Lafayette Blvd.. We are committed to filling the courtroom every day of the trial, which is expected to last up to three weeks.

Tuesday, November 4  to Friday, Nov 7
Weekdays from 8am to 1pm at 231 W. Lafayette Blvd., downtown Detroit.  Visit StopFBI.net to register. For those coming to Detroit from out of town: The Rasmea Defense Committee is working hard to support your housing and transportation needs. When you register, at http://www.StopFBI.net, let us know how we can help.

Join us for a protest to demand freedom for Palestine and to demand that the federal government drops the trumped up changes against Palestinian American leader Rasmea Odeh! The Minneapolis protest will coincide with Rasmea’s next court appearance in Detroit. The U.S. government is trying to prosecute her for allegedly lying on her immigration papers ‐ about her Israeli imprisonment 45 years ago. The wrongful conviction in Palestine was the result of vicious physical and sexual torture by the Israeli military. Rasmea is a well‐known activist is Chicago and she is fighting her charges. Join with us to stand in solidarity with the people of Palestine ‐ both at home and abroad

Sponsored by the Minnesota Committee to Stop FBI Repression
https://mnstopfbi.wordpress.com/ 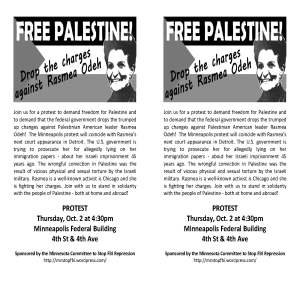 Join with us at WAMM’s weekly Palestine vigil to demand an end to the siege of Gaza, an end to U.S. military aid to Israel, and to stop the prosecution of Palestinian activist Rasmea Odeh. August 1 is Rasmea’s last court date in Detroit before her trial as the U.S. government prepares to prosecute her for allegedly lying on her immigration papers about her Israeli imprisonment 45 years ago. The wrongful conviction in Palestine was the result of vicious physical and sexual torture by the Israeli military. Rasmea is a well-known Palestinian activist is Chicago and she is fighting her charges. Join with us to stand in solidarity with the people of Palestine – both at home and abroad!

Co-sponsored by Women Against Military Madness, the Committee to Stop FBI Repression, and the Anti-War Committee. 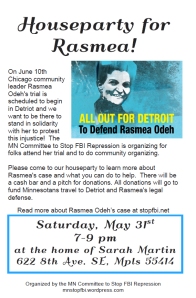 On June 10th Chicago community leader Rasmea Odeh’s trial is scheduled to begin in Detroit and we want to be there to stand in solidarity with her to protest this injustice!

Despite months of Rasmea Defense Committee organizing in Chicago and across the nation, the U.S. government refuses to drop its case against Rasmea, who they are alleging lied on an immigration application she filled out 20 years ago.  If found guilty, she could face up to ten years in federal prison, an immediate revocation of her citizenship, and then deportation from the United States.

The charge against Rasmea is nothing but another political attack by the U.S. government, meant to defame and criminalize another Palestinian, Arab, and Muslim leader who has dedicated her life to the empowerment of her people, as well as to intimidate and repress entire communities that are organizing for justice and liberation.  She was brutally tortured into a confession by the Israelis 45 years ago, and now the U.S. is trying to brutalize her once again.

After giving so much of her life to others, Rasmea now needs our support.  We have already received statements of support from over 100 organizations, and more than 3,000 people have signed the online petition for Rasmea.

The attack on Rasmea is an extension of the attack on local anti-war and international solidarity activists. We have seen this before, two years ago when the government targeted Chicano community leader Carlos Montes. Through dedicated organizing we were able to keep Carlos out of jail and instead doing the important community work he still does today.

The MN Committee to Stop FBI Repression is organizing for folks attend her trial and to do community organizing.  Please come to our houseparty to learn more about Rasmea’s case and what you can do to help.  There will be a cash bar and a pitch for donations. All donations will go to fund Minnesotans travel to Detriot and Rasmea’s legal defense.

Organized by the MN Committee to Stop FBI Repression.
For more information about her case go to stopfbi.net.

The Minnesota Immigrant Rights Action Committee (MIRAc) condemns the politically-motivated arrest and indictment of Rasmea Yousef Odeh, Associate Director of the Chicago-based Arab American Action Network (AAAN), on an immigration-related charge. The sixty-five year old was arrested at her home in late October by agents from the Department of Homeland Security, alleging an immigration violation on a 20-year-old application. Immigration law should not be used as a weapon of political repression!

Rasmea, who has made it her life’s work to serve and help empower Palestinian and Arab families, is the victim of a witch-hunt by our federal law enforcement agencies, which continue to violate the civil rights of Arabs and Muslims with impunity. Rasmea is a leading member of Chicago’s Arab and Muslim communities, and her decade of service has changed the lives of thousands of people, particularly disenfranchised Arab women and their families.

As the Associate Director of the AAAN, Rasmea is responsible for coordinating an Arab Women’s Committee, which is active in defending civil liberties and immigrant rights.  She is a mentor to hundreds of immigrant women, and is a well-known and respected organizer throughout Chicago, the U.S., and the world.

Earlier this year, Rasmea received the Outstanding Community Leader Award from the Chicago Cultural Alliance, which described her as a woman who has “dedicated over 40 years of her life to the empowerment of Arab women, first in her homes of Palestine, Jordan, and Lebanon…and then the past 10 years in Chicago.” Rasmea is a community icon who recently completed a Master’s degree in Criminal Justice from Governors State University.  She was tortured by Israeli authorities while imprisoned in Palestine in the 1970s, and is a proud reminder of the millions of Palestinians who have not given up organizing for their rights of liberation, equality, and return.

It is appalling that our government is now attempting to imprison her once again. We condemn this attack on Rasmea, as well as the broader pattern of persecuting Arabs, Muslims and other immigrant communities.

We ask all of our supporters to sign the petition at http://www.iacenter.org/rasmeaodehpetition/ to demand that they Drop the Charges against Rasmea Odeh Now!

Students for a Democratic Society at the University of Minnesota condemns the charges brought against Palestinian community leader Rasmea Odeh of Chicago. Her October 22nd arrest by agents of the Department of Homeland Security can be seen as nothing less than an attempt to silence her voice decrying the oppression of and demanding justice for the people of Palestine. The charges brought against her claim that she failed to properly document an arrest 45 years ago by Israeli military authorities, which routinely deny Palestinians due process, legal rights, human rights and justice daily. This outrageous charge seeks to imprison her for up to ten years, strip her of American citizenship and ultimately deport her upon her release from prison.

This is undoubtedly a vicious political attack related to her longstanding activism on behalf of the cause of justice for the Palestinian people. This case is certainly related to those of fellow activists of the Anti-War 23. The Anti-War 23 were targeted in the wake of the 2008 Republican National Convention in St. Paul, Minnesota and included a focus on activists who had traveled to and supported Palestine. Similarly activist Carlos Montes, once a member of the East LA 13, was raided and charged on the basis of similarly outrageous offenses related to supposed incidents dating back over 30 years. This attempt to silence these outspoken activists fighting for justice at home and abroad have all failed.

This case like that of the Anti-War 23 and the case of Carlos Montes is not about the charges brought forth, but is directly related to the politics of those indicted. Students for a Democratic Society at the U of M recognizes that the same office of Assistant U.S. Attorney Barry Jonas attacked the humanitarian non-profit aid group of the Holy Land Foundation which resulted in the political imprisonment of the Holy Land 5. It is also from this same office that the political attack on the Anti-War 23 emerged. It is from this office that the repressive legal apparatus of the United States has reached out across the Midwest to attack people for their politics. And now the same office that has attacked the Holy Land 5 and the Anti-War 23 is attempting to silence Odeh for her longstanding support for her homeland, Palestine. SDS at the U of M stands in solidarity with Rasmea Odeh and will support her throughout her fight for justice. We demand that the U.S. Attorneys Office drop all the charges against Rasmea Odeh. We demand an end to all political repression and we demand an end to the occupation of Palestine.

Posted on 11/06/2013 by mncsfr
PDF of flyer – 11/13/2013 Protest for Rasmea in Minneapolis
Rally to Drop the Charges Against Rasmea Odeh
Wednesday, November 13th @ 4:30 pm @ the  Federal Building, 4th Ave &  4th St, Minneapolis
Palestinian community activist Rasmea Odeh was arrested Tuesday, October 22nd, at her Chicago home by agents of the Department of Homeland Security, FBI and ICE. She is charged with immigration fraud. Allegedly, in her application for citizenship, she didn’t mention that she was arrested in Palestine 45 years ago and tried in an Israeli military court that does not recognize the rights of Palestinians to due process.
Now the U.S. government is carrying out enforcement of the Israeli occupation of Palestine, and Rasmea faces being stripped of U.S. citizenship, a prison term of ten years and probably, after prison, deportation. The charges against her are a political attack on her as an individual, and on Palestinian, Arab and Muslim communities across the U.S. as a whole. The charges against her are part of an ongoing campaign against Palestinians and those who work in solidarity with them. Barry Jonas, the same prosecutor pursuing 23 anti-war and international solidarity activists, including nine from Minneapolis, is helping build the case against Rasmea.
Rasmea is the associate director of the Arab American Action Network (AAAN), one of the oldest institutions in Chicago’s Arab community. She leads a women’s committee with 600 Arab and Muslim women and she is also a leader in the immigrant rights movement in Chicago. Join us November 13 for a national day of action to support for Rasmea on her court date, demanding the charges against her be dropped.   Organized by the MN Committee to Stop FBI Repression.
Sign the petition to demand charges be dropped athttp://www.stopfbi.net/sign-petition-rasmea-odeh